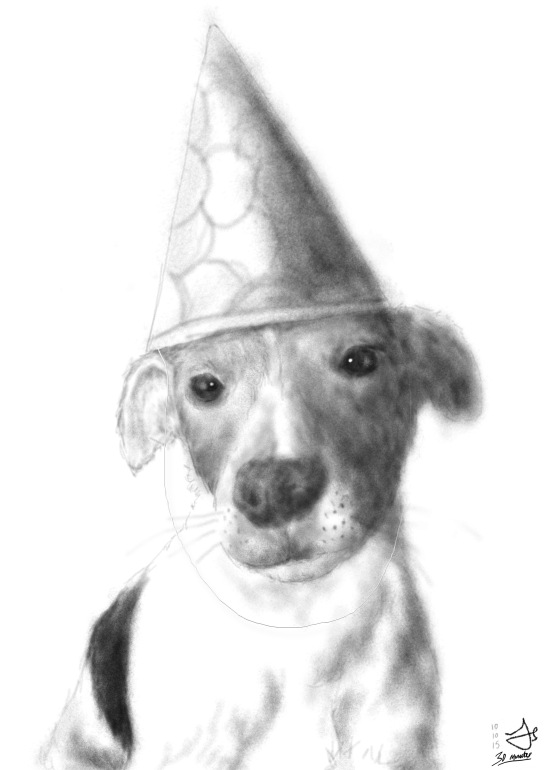 Another Saturday spin, and after last week getting excited at the prospect of doing some super-quick sketches, my big round overlord for these challenges, the Wheel of Time, decided to be cruel and only very nearly granted me my wish. It landed on 30 MINUTES. I’m thinking of altering the spaces on the wheel as the weeks go on in a bid to ensure variety, but I’m unsure; perhaps doing several exercises of the same duration would be even better?

For a change and a slightly easier ride, I moved away from people this week, but didn’t move away from Reddit Gets Drawn. There’s often a healthy glut of cute animal pictures to choose from, and yet again I wasn’t disappointed. I initially was to draw two cats, but then I happened upon this character; an adorable dog indeed, topped off by the suitable look of ‘really?’ to the birthday hat.

Considering I didn’t start shading until around nine minutes in (I now have a stopwatch with an alarm in front of me and everything… I take this extremely seriously!) I think it came out quite well! It’s probably my favourite of these challenges so far. I would have liked to have worked on and around the eyes a bit more, and the nose is a bit off, because, as you do, I completely forgot to even begin shading it… it was still white with about six or seven minutes left, and I panicked like mad with it. It was the same with the hat… I was sitting there touching bits of shading up as time was reaching its end and then scrolled up and realised I hadn’t even touched it! It’s much more snazzy and festive in the photograph.

This was such a ridiculous amount of fun to draw. I shall endeavour to do more animals, timed or not – as both character and subject, they put us to shame!

I wonder what time limit we’ll be dealt by the nasty spinning wheel next week? Isn’t it exciting – I bet you’re all on tenterhooks all week wondering, aren’t you? Wheel have to see what happens! (Have I done that one in a previous post? Probably have. Oh well.)