About fifteen or sixteen years ago, I got pretty heavily into the circus of the WWF. My father was, my brother was, my best friend was, so it seemed the natural progression from whatever else I was into at the time (genuinely can’t remember).

Being under the age of ten, this meant a steady swarm of WWF merchandise was to follow. Videos, PlayStation games, CDs, masks… the usual stuff. But the stream that drained the pocket of my mother and I the most, was that of the action figures. They came in at around seven pounds a pop, and I must have bought about seventy of the things. There were so many different types. Ones that talked. Ones that performed their own moves. There was even one series called I believe ‘Maximum Sweat’, which did what it said on the tin. I think that came just before I broke in, though, so I didn’t have those.

I can remember being so excited to get my first ones, and the boxes teased you by showing you all the others you just had to buy. Looking back, I’m not really sure why I wanted them so badly – I would easily tire of them and scarcely touch them again, rendering them even more a waste of money than anybody commented at the time. Curiously enough, my brother says similar about his over-expansive collection of Batman toys; the only recollection I have of him playing with those is with me on a couple of Saturday mornings. I daresay he spent far less on those, though! I guess it’s just the boy and his toys.

Inexplicably, I found myself becoming bored of WWF (by then WWE) when I noticed I was paying more attention to those tight trunks than I was the ‘story’ being told. This being said, these chaps were still turning up for years after at Christmas and birthdays. The last one I ever got, for my fourteenth birthday, André the Giant, stands on my bookshelf waving at me… well, I would say every morning, but these days it’s rarely morning when I get up. André’s comrades are hidden under my bed in a crate. I’ve thought about it many times, but I’ve never been able to get rid of them.

There was one figure I remember searching high and low for, and never finding: Kane. He was a masked, seven-foot beast and the storyline brother to The Undertaker. I was largely indifferent toward the character, but he was a big star and it seemed that I owned the figure of virtually every other wrestler ever to compete; this was for the sake of completion. After waxing nostalgic on these bad boys, some doodling spiralled into this – essentially making my own Kane… in Photoshop, of course. This is a relatively new model but is based on his 2000 look, so precisely my era. I painted rather than sketched in my usual fashion, to try and give a smoother, more plasticky finish, then broke the figure up into its joints. It was sweet to have a pose-able Kane at long last; below are some of the results.

Kiddy me is smiling. I might do some more of these using my own collection, we’ll see. 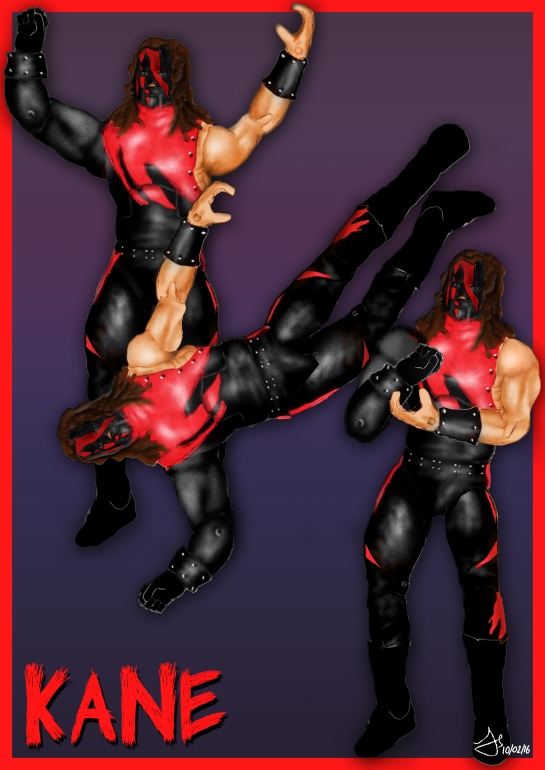