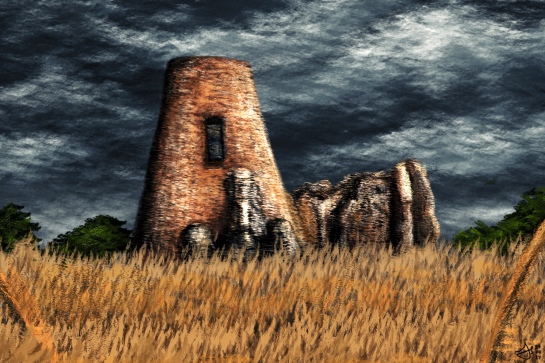 Contrary to my previous post, it’s been lovely today. Hot, but not too hot. Later on, however, the sky developed a bit of a temper and I became hopeful of a storm, but as yet nothing has happened. Just like my previous post, I’m holding out for a rumble…

That would explain the attraction to a particularly stormy reference photo and a return to St Benet’s Abbey after almost two years. (The early days. I posted five images in that one post – what’s happened to value for money?)

I’ve done lots of atmospheric-minded stuff quickly and with a limited palette, if not entirely monochrome; some of these were initially to be colour but didn’t turn out well, hence the reduction. Tonight I didn’t allow myself that safety net, and tried to capture in full colour that powerful, moody light as it bathes the ruins – something I’ve always loved about the onset of a thunderstorm.

This was fun. I am enjoying this particular brush – the same as I used last time for my picture postcard. Its long and weathered shape is coming in handy for both brick and vegetation, not to mention texture. I did end up spending longer on this than I’d planned – just a creep over the hour – but that was only because I was having too good a time marking the ruins. No complains there!

I wrote at some length before about the rich history and lore wrapped up in the remains; it really is a tremendously stimulating place, and so I would recommend a visit if ever you can – when the weather’s nicer than this, though!