Yes, it’s that time of year, where outside sounds rather like a war zone thanks to fireworks screaming and banging all over the place. I don’t know, maybe I’m getting too old for this stuff. Well, as the saying goes, if you can’t beat ’em, join ’em. So I did, in a manner that won’t break the bank and terrify animals everywhere: I attempted to create some 3D animated fireworks.

They’re pretty simple, actually: an emitter producing planes, which are tagged with motion blur and highlights, giving them the coloured glow you see in the render. There’s also a gravity effector at play, pulling them downwards and, hopefully, achieving a more realistic effect.

The above was done with tracers, giving a slightly more authentic trail, and I think the gravity effects are much clearer here, too. I rendered with no anti-aliasing whatsoever, in-keeping with this, the year of the pixel. 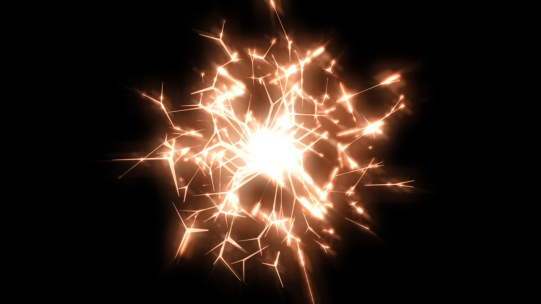 I also had a go at some sparkler effects; it’s a similar deal, but this time using some random ‘sparkly’ shapes and cloning them spherically, rather than having an animated emission. They did get better as I went along, which I suppose is good.

And with the final GIF (I promise) we come to this obscene spinny firework thing – technical term, you understand. Just two emitters – albeit with much narrower range than previously – grouped together and rotated.

I have to say this year has been relatively quiet for fireworks, so perhaps I shouldn’t be so sour on the subject. If you are visiting a display, burning an effigy or any kind of festivity this evening, then do have fun. If you aren’t, well, who needs it when you have this? 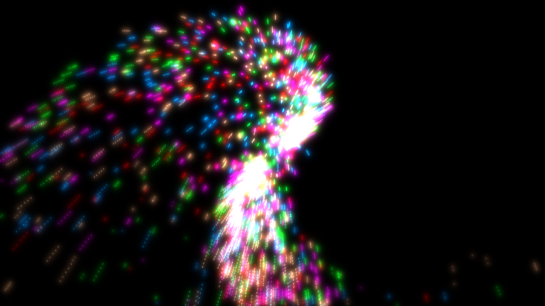 How are we not even halfway through yet? Blimey mate, I need a lie-down. To any daily blogger who makes being entertaining look so easy, I doff my cap!

Anyway, we’ll carry on through it all, because we’re a waterfall. This time, I was dealt Y and Fluid. The traditional form took me straight in this direction, and yet another excuse to try some Photoshop animation of a stop-motion ilk. Working swiftly here (or rushing, whichever you’d prefer) did create a softer, more stylistic scene than I’d likely have ended up with otherwise. 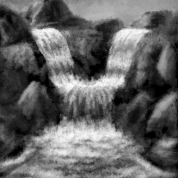 The saturated overlay of colour probably contribute to that end aswell, but I’m left pining for the black-and-white, ultimately. Not the finest execution, but there’s a concept there at least. Woo. Now for that lie-down, I think!

Distorted is another I was looking forward to. While I could have taken an X and just bent it out of shape, I took the opportunity to take it in the ‘glitch art’ direction. The outcome is apparently a homage to the early days of Freeview.

The final X is cut into rows, each of them transmitting a distorted, offset segment of the letter and distributed randomly with each frame. I did try some other compositions for the grid, using columns and squares: 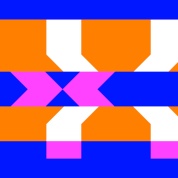 Some nice looking Ks in there! The bright colour scheme was what I originally went with, but I chose to distort that by inverting and desaturating, muddying it up slightly. Lots more that could be done with this, should it come up again! 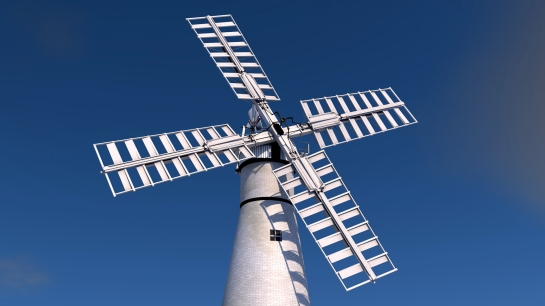 I’ve put my windmill models into action before, using keyframes to bookend the motion of the sails. This time around, however, I’m playing with some of the software’s simulation tools and sticking the sails onto a Motor object. As you’d expect, this works rather like a continuous supply of energy, allowing objects to move or spin, depending on your configuration. It seems silly that I’ve not thought to use this before now, but then, I never have been one for the simple route!

With that constant power, the controls simply allow you to moderate and determine how much it provides, making a smooth start and fluctuating revolution speeds a breeze to animate. Not a ground-breaker, perhaps, but satisfying, and a very useful thing to have discovered.

Our subject for this experiment is Thurne, which stands on the outskirts of the village of the same name and beside the river of the same name. It was built in 1820 and worked for over a century, shutting down for the last time in 1936. By 1950, and like many of its peers at the time, the mill was lying derelict and under threat of demolition, but fortunately rescue came at the hands of Bob Morse, a windmill fanatic, and soon the Windmill Trust took it on. Since then, it has been kept in good condition and, with its splendid white coat and pretty vicinity, enjoys a reputation as one of the most popular on the Broads – I believe recently it has even been restored to full working order, an accolade that can’t be boasted by many broadland mills and one which makes it even more worth a visit.

A short time ago, I posted a clip of the motor power on my Instagram gallery.

My intrepid blogging expedition, whose aim is to shoehorn The Crystal Maze into as many of our exchanges as possible, continues this evening, with another three-dimensional homage to the show – this time, the iconic Crystal Dome itself. The shadows are a bit intense, but the deflector and emitter animation is a lot of fun and working better than I’d have expected. The geodesic structure of the Dome was created simply by altering my previous time crystal and making a second Atom Array for the framework.

For the circa 100 per cent of you reading who haven’t ever seen the programme – or were quickly bored by my essay and didn’t read it, not that I could blame you – a team of six journey through the maze, pitting themselves against fiendish and frustrating mental and physical challenges. For each of these games that they beat, the team receive a time crystal. Each crystal wrested from the maze is worth five seconds inside the Crystal Dome, a glorified wind tunnel full of gold and silver tokens.

The crystals bagged by the team were placed on a podium and ‘went out’ in five-second intervals. For the record, no team ever came close to that many crystals – I believe ten was the max. Some even got to the Dome with just one!

Inside the Dome, the team must collect and post one hundred gold tokens into the letterbox (or ‘cosmic pyramid’ as Ed Tudor-Pole labelled it). For every silver token that inadvertently slips through, one gold is taken away. Really it was just blind luck – there was no time to sort them, so stuff stuff stuff the letterbox was the general plan of attack. Sadly it was a plan of attack which led to many teams posting a sub-zero tally of what they were after, and that wonderful water sports day out in Hay-on-Wye passed them by. 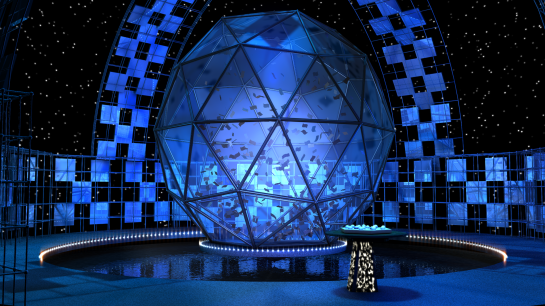 I’ve said before, it’s by far the weakest section of The Crystal Maze in terms of the mechanic, but it’s unquestionably memorable and I’d still rather like a go. It’s a good job there’s that live theatre experience thing starting up in London soon!

Here is a rare occasion – a team who actually won! It’s the full episode, but on playing it should start immediately before the Dome:

How I laughed when I touted the idea of a spinning wheel to determine the time limit for my Reddit Gets Drawn practice runs. What a ridiculous suggestion.

Um, yeah, you didn’t realise that, behind the laughter, I was being deadly serious… or I just turned to this in a fit of boredom and burgeoning flu. You decide.

I have basically taken to Cinema 4D and refaced the wheel from our version of Wheel of Fortune, just to inject extra fun. Wasn’t that a wonderful show? Or not. But that satisfying ‘ping’ every time a contestant guessed a letter that was in the puzzle, and the adorably cheesy models flashing the prizes… ahh, the nostalgia. As you can see, there are some beastly spaces on that wheel, which I’m sincerely hoping it doesn’t land on anytime soon. I think if I pick any of the shortest ones I might have to ditch the Reddit element and work on self portraits – it’s okay to offend myself, I’d rather not do it to others!

The most exciting thing on this – besides the generous helping of glitter on the type – is that the little flipper you see actually reacts to handles of the wheel, with some magic from connector dynamics. It took a great deal of time to create, and it’s a small reward in stature, but a pleasurable one when it works.

In fact, I think this blasted wheel took longer to rejig than most of the values on it put together! Oh well. It’s learning. Learning is good. I had a wheel of a time.

Will I actually use it to determine my time limits? Well, that depends entirely upon what it lands on…! 😉