Every so often, you just gotta draw a cat. Being that time of year, I thought I’d go for our old girl Maisie, who moved in on Halloween back in 2001. What a frightfully feisty trick she was, but a treat all the same.

It’s been years since I’ve drawn a seal – one that’s ended up here, anyway – so here we are. Seals are the coolest. That’s all there is to say, really. 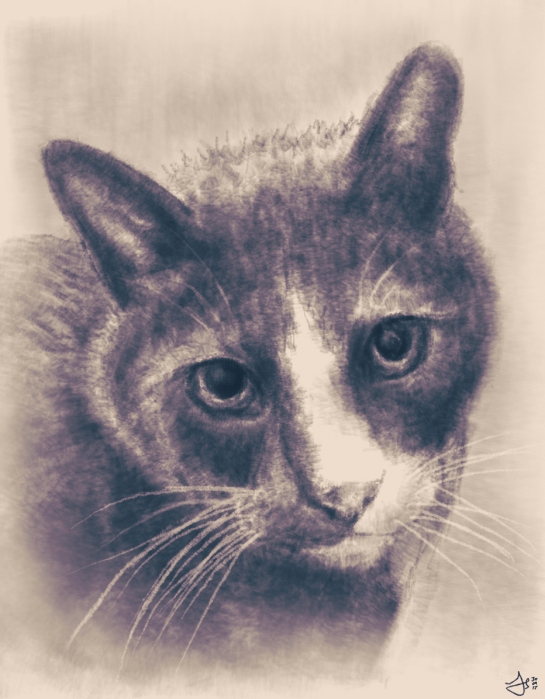 Wanting to draw a cat, there can be no better candidate. He always was a poser!

I’m just about on time for National Ferret Day. Well, it appears this celebration is largely based in the USA, so in that respect I’m well and truly on schedule. Of course, this is partly inspired by Charlie and his new series looking into the various celebrations taking place each day through April, though I don’t expect this to count as I’m of course breaking the most important rule by doodling without washing. (I’m referring to the process there you understand, not an alarming disregard for self-hygiene.) Do join in yourself!

What cute little creatures they are. They’re incredibly lively, sociable and friendly, too, as Richard Whiteley would doubtless have testified, were he still with us.

Poor Richard. I do enjoy how the interviewee sees what’s happening, and what does he suggest? Here, take two more of the things! Whiteley often (correctly) mused that this moment would be the most part of his legacy, and indeed, various publications reported his death with the headline ‘Ferret Man Dies’.

But hey, if that’s the kind of play you like and fancy a new pet, then by all means go ferret! There was a woman who lived a couple of doors down from me who had a pair of pet ferrets, and in all seriousness they seemed rather charming and lovely, to the extent that I’d quite like one, even if Richard’s image is waving a bloody finger, warning against it. She even used to harness them up and take them for walks – it certainly turned heads. I don’t remember ever learning her name; I just knew her as the Ferret Lady. Obviously, these creatures define the people they are around – perhaps that’s why they’re such cool pets.

If you want to join me in celebrating today then by all means go ferret! I’ve already done that once. There’s no time for puns – sorry Richard. 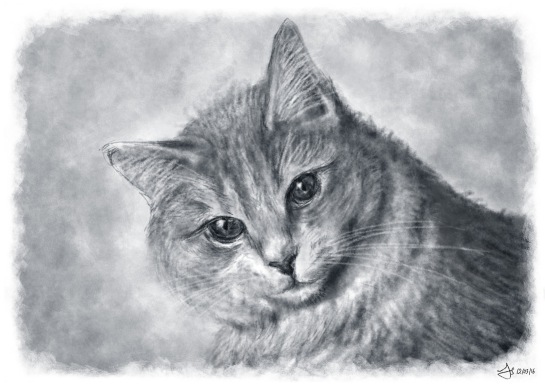 You go ages without a foray into Reddit Gets Drawn and then you do two in a row. Crazy, I know. Anyway, here’s Paisley, a very pretty cat who appears to know as much going by the pose in this photograph… but then, show me a cat who doesn’t know! Indeed I was struggling to find the motivation to draw anything today, until this adorable little one came along – bang goes my early night, eh Paisley? I’ll let you off ’cause you’re a cat.

For those stopwatch/Wheel of Time Reddit enthusiasts, I did try and go as quickly as I could (though I’d be lying if I said the aforementioned plans for sleep weren’t a big factor in doing as much). This took about an hour and a half in total, which is really rather quick for me.

And so to bed! Or at least when I’ve done my WordPress rounds. Yeesh, no rest for the wicked… I’m just joshing, of course. Where would I be without my bedtime reading?

I expect there to be many vastly more charming drawings of Paisley to come, so be sure to keep a paw on the comment thread.

Really, I’m quite ashamed it’s taken me this long to get to drawing a goat. Sigh. How I wish I had the space for a few of the characters!

It’s been quite some time since I spun the wheel and went shopping for inspiration at Reddit Gets Drawn. For those newer readers that might not know: I have a colourful, uber-glamorous Wheel of Fortune-esque spinner, adorned with various time limits. I spin it, and it gives me the time limit for a drawing. Simples. I used to do it as a weekly thing on Saturdays, but after completing the first wheel, Christmas came and went and my routine was knocked about. Now I’ve settled on it just being a sporadic, whenever-I-darn-well-feel-like-it kind of thing, which will do me just fine.

Anyway shut up Jacob and get to the point. After a dusting off and a fresh coat of glitter, the wheel played ball, and gave me 130 MINUTES to work with my latest subject.

What an absolutely adorable photograph! I couldn’t resist. This time limit was generous, and thank goodness too – I must have abandoned and restarted shading the face five or six times in the first forty or fifty minutes. The shading just wasn’t working, there was either not enough contrast or far too much. Needless to say, this stumble worried me somewhat, ever more mindful of the ticking clock, but thankfully I managed to get something sweet out of it in the end. I focused heavily on the cheeks and chin, trying to really bring out that grin.

I’m happy to devote more time to the face than the clothing, it was well worth it, but the issues encountered meant there wasn’t perhaps as much time on the outfit as I’d have wanted. I think that’s clear looking at his trousers, and something about the truck doesn’t sit right to me – I think its too clear that I just did it on another Photoshop layer, thrown on… perhaps more shading on/around it would have helped. There was a lot more charming decoration to his tanktop too, but I left that out in the interest of time.

Much as I am picking holes in it, I am chuffed with the result. I think I captured some of the sweet little boy in my drawing. And now I find myself wanting a child of my own.

What a cool dog! I could not resist.

This is another trip to Reddit Gets Drawn, tidily restored to the traditional Saturday slot, however, the wheel, erm… wasn’t working, so I couldn’t do it under timed conditions, sorry. 😉 No, in truth, I just thought I probably wouldn’t be able to do this lovable little tyke the justice deserved. Too adorable to go by swiftly.

I reverted from Corel Painter back to Photoshop for this. Starting out in Painter, I quickly began to get lost in an awkward smudge of black and brown paint, so after a few hours found myself back with the ol’ faithful. Maybe I shouldn’t have chickened out of the practice, but the dark coat and fur seemed a very daunting task and I just felt as if this would be the better way to go. The Photoshop result has come out better, with a pleasing synergy between it and my drawing of the grey wolf. I will, however, endeavour to try a furry creature in Corel before the trial expires.

Here’s the comment thread, which contains the photograph and some particularly good responses.

In signing off, here’s another cool dog:

Too much laughter. Woof woof indeed.

The tortoiseshell – a feisty, powerful and hugely loyal character.

A creature of such beauty and majesty, I’m surprised it’s taken me this long to draw a tiger.

Tiger numbers have dropped by 95% in the last century. Today, there are more tigers captive in the US than left in the wild. – WWF