I may not have been posting much since completing the Twenty-Six Spins challenge – indeed, by that, I mean I haven’t posted at all. But I have been keeping busy, on a daily basis no less, with several pieces, and hopefully these will be ready to show soon. I’ve certainly felt more awake creatively since the challenge, such that this exercise was my idea of letting off some steam. Hopefully, it’ll last. I pushed it enough while it was running, but I’ll say one more time: do give it a whirl. You’ll be pleasantly surprised. 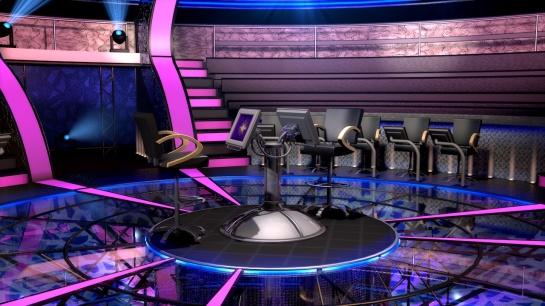 You could say that the aforementioned series was a lifeline for me – see what I did there? I found myself playing with my Who Wants To Be A Millionaire model from earlier in the year, with a view to bringing its nineties complexion up to date – well, 2010 anyway. There wasn’t much to like about the series from that year, which introduced a ‘big bad clock’ for questions and essentially killed the show. They did, however, use more pink and purple around the set, and that’s never a bad thing. I’ve dialled that up here, and though I’ll probably always favour the original set, I’m enjoying the heightened neon-retro feel here.

The new curvy columns aren’t great, but will do and shouldn’t be hard to tweak. What does bother me somewhat is the bumpy decoration on the backing panels, not looking particularly accurate; wouldn’t you know it, a simple tweak made it vastly better – a shame this came after the eight-hour render session, huh. Still, as its essentially the same set as that of my first Millionaire attempt in 2016, it’s pleasing to see a much more accurate reconstruction overall.

It was great to see Who Wants To Win Enough for The Parking Meter While They’re In Here back last month with Jeremy Clarkson at the helm. Not being a massive fan, knowing his reputation and having never run into Top Gear, I wasn’t really sure what to expect of Jezza. As it happens, I was pleasantly surprised; he was very funny and, though he mocked, you could tell he really wanted the contestants to do well – even when it was clear they probably weren’t. His appointment gave Millionaire an air of unpredictability and intrigue that it probably hasn’t had since 2000. I gather it was a success, holding its audience across the series, so hopefully we’ll get another run soon, since that would mean all the more opportunity for stuff like this!