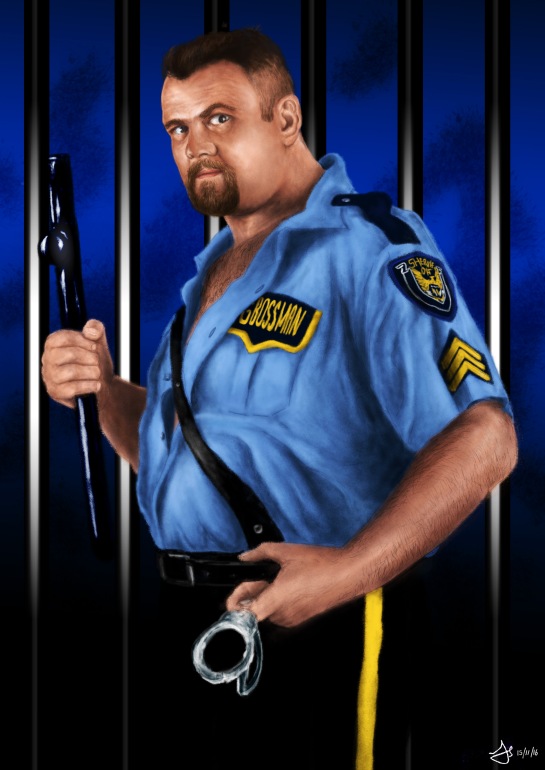 Uh oh, looks as if we’re in for some hard times! Having dished out punishment as bodyguard Big Bubba in Jim Crockett Promotions and UWF, Ray Traylor morphed into law enforcer in 1988, appearing in the WWF as The Big Boss Man. At six-foot-six and nearly three hundred pounds, hopes weren’t high for those pitted against Boss Man – they became even less when, after the punishing offence, he’d  brandish his trusty nightstick, ball-and-chain and handcuffs. Police brutality indeed, and certainly a hard-hitting gimmick for a superstar of 1988 WWF to be given.

The Boss Man’s presence and rampant dominance meant that an encounter with Hulk Hogan was inevitable – Hulkamania was the target of all the monsters, bar none. Coupled with another huge man, Akeem, the pair became known as The Twin Towers and set their sights on the red and yellow icon. Hogan was teaming with Randy Savage at the time, and as a consequence The Boss Man was given several really entertaining matches with ‘The Macho Man’ over the World Title, besides some big cage matches with Hulk. Though The Twin Towers were materially unsuccessful, their meddling in the affairs of Hogan and Savage would lead to their disbanding and eventual face-off at WrestleMania V.

Continuing to brutalise the opposition throughout 1989, The Big Boss Man came to the attention of ‘Million Dollar Man’ Ted DiBiase, who rather liked the idea of owning a crooked cop. When Boss Man refused DiBiase’s handsome payments, he won over the crowd and became a fan favourite. Splitting from Akeem – and beating him at WrestleMania VI – he adopted a purer pursuit of justice, saving the beatings only for the WWF’s real evildoers. Like The Mountie, a crooked Canadian cop, whom he beat in the first ever (and only) Jailhouse Match at SummerSlam 1991, sending his toppled foe off to prison for the night.

Boss Man (sadly) spent much of 1992 battling Nailz, a deranged ex-convict who apparently arrived in the WWF specifically to get revenge on the law enforcer, subjecting him to beatings that were characteristic of his own villainous roots. The feud finally ended at November’s Survivor Series, with justice prevailing in a Nightstick Match.

He disappeared from WWF in early 1993, spending five years in WCW with a character that began as a near-identical retread of the Big Boss Man mould. One wonders how WCW managed to get away with that; was it because he was wearing a black shirt instead of blue? Hmm!

He’d be back in the Federation by late 1998, initially under a balaclava and mostly serving as a hired gun for the dominating ‘Corporation’ faction, headed by owner, Vince McMahon. His gimmick now able to get really brutal in line with the change in product, he gelled perfectly with the hardcore division, and he was a multiple-time Hardcore champion. This being said, he still mingled with the top stars, engaging in rivalries with Stone Cold Steve Austin, The Rock and The Big Show over the WWF title.

When the hardcore product started to fizzle out in the early 2000s, many of its associated performers did too, Boss Man being one of them. He had a last hurrah, again under the employ of McMahon against Stone Cold in 2002, but after that he retired to behind the scenes, working with up-and-coming talent. Sadly he would die of a heart attack just a couple of years later, at only forty-two.

Traylor knew how to play the crowd, particularly as a corrupt lawman, and even though some of his outings are looked back on less than fondly – being hanged by The Undertaker at WrestleMania XV… yes, really – one cannot fault Traylor’s commitment to the role and each of the wacky plots he was thrown into. I’ve no doubt that’s a big reason why he was continually rewarded with such strong billing. He certainly commands respect – and well, I suppose those that don’t give it him can expect hard times!