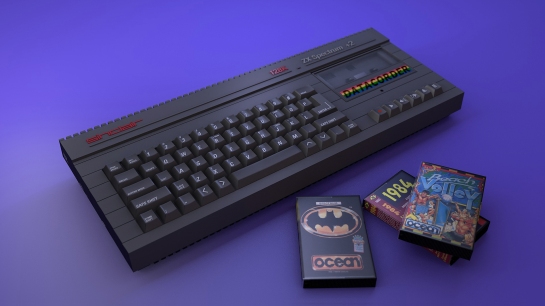 At the risk of developing square eyes, another attempt at computing modelling using a computer, and moving into the eighties we have the legendary ZX Spectrum, developed by one Clive Sinclair. Released in the spring of 1982 to enormous demand, the Spectrum championed rubber-keyed home computing, and at an affordable price; the launch model sold for £125, significantly cheaper than virtually any competitor of the day. It quickly became Britain’s best-selling computer and would go on to perform just as well across Europe.

I believe the +2, a 128k revision released in 1986 which I’ve attempted to model here, was our first home computer – though, sadly, I don’t think things got off to a great start. It can’t have had a particularly impressive lifespan, as my only recollection of it was broken in a container gathering dust, while the later +2A model was wowing the family with the likes of Trap Door, OutRun and Blockbusters. This successor seemed to power on valiantly until it was thought obsolete circa 2000 and, criminally, disposed of.

I wasn’t ever allowed near it that much – I barely knew how to use it anyway – but I do have vivid memories of sitting and watching others play these games; games that weren’t on a par with visual quality to our snazzy 16-bit consoles that I could play, but were still engaging, and in some ways felt more fun. The bright colours surely helped, and perhaps being branded unworthy of touching the thing alone did, too… but I’m sure there was more to it than that, for its impact hasn’t lessened in twenty years of my time, nor thirty-five years of technological progress. 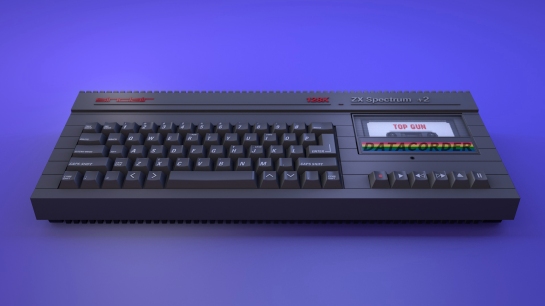 One of the Spectrum’s biggest triumphs was melding the computing and gaming offering, going one step further and encouraging enthusiasts to create their own games, aided by bespoke software and publications. Magazines would print reams of code on a regular basis. I daresay a large number of today’s programmers cut their teeth on the Speccy, and that introductory element, tapping into the creativity of its audience in such a way surely goes some way to explain why its users remember it so fondly. 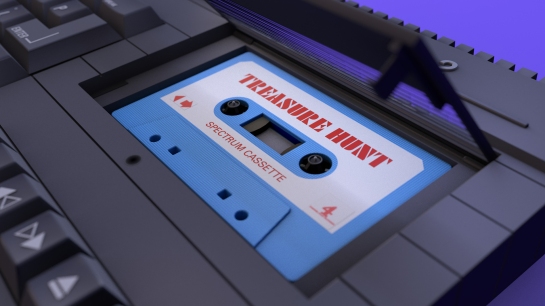 With such enduring features on its side, the Spectrum had a long life and saw off most of its contemporaries from the early eighties. It was discontinued in 1992, after multiple refreshes and revisions, though games would continue to trickle out in some regions for a couple of years. This being said, the machine is far from dead; the community thrives, and excitingly you will find homebrew games are still being put together to this day. Proof, if ever it were needed, that there is something magic about the ZX Spectrum. 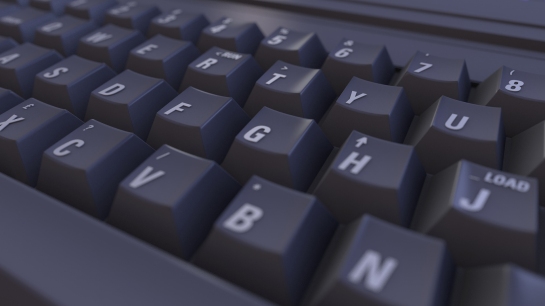 I do hope you can see some visual improvements in these renders. I’ve finally figured out how to operate the depth of field tools and capabilities! It’s something I was a little daunted by, blindly changing configurations and hoping for the best, but already it’s throwing out some promising aesthetics, giving scenes a far greater physicality. The keys may be way off, but the effect is nice, so that’s okay! It’s a great tool to have at my disposal as I continue ambling through this modelling lark.

One of the games I remember very clearly from back in the day is Batman The Movie, based on Tim Burton’s first outing with the Caped Crusader. I still love its soundtrack. It’s still bloody hard! 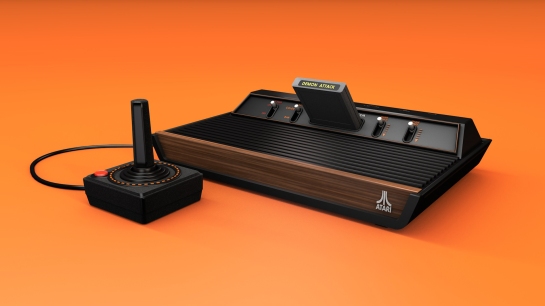 Now we can play Pong at home!

With another veritable brainwave, I decided to have a look at some home computers and consoles for 3D inspiration. There isn’t really a better starting point than the Atari VCS, or, as it was later known, the Atari 2600.

A response to the increasing popularity of arcade games like the aforementioned table tennis simulation, Atari invested $100 million into the development of this home system prior to its eventual release in September 1977. It was introduced at a price of $199.99, which sounds relatively reasonable, until you factor in forty years of inflation. This is equivalent to almost eight hundred dollars today! Such might explain why sales were decidedly modest to begin with. Eventually, though, the console gained momentum, and at its peak in 1982 sold over eight million units, the first machine to do such impressive business and prove demand for home gaming beyond any doubt. 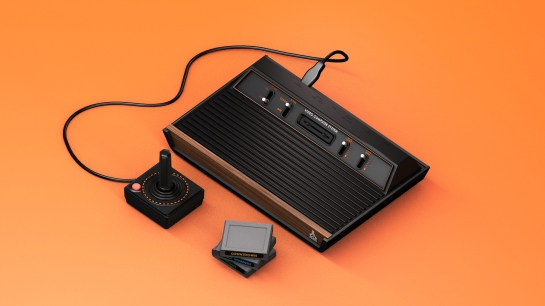 Though there were many highlights, with a string of arcade hits improved for making the jump to cartridge and colour, complicated hardware coupled with the increasing demand and saturation of the video game market in the early eighties saw individual titles suffer, with many being rushed if not scrapped altogether. Perhaps the most notable example of such a rush job is E.T. The Extra Terrestrial, a colossal failure and regarded by many as the worst game ever made. While I’m not sure I’d go quite that far, I have played it, and can confirm it is indeed quite the experience.

All of this being said, the 2600 was incredibly resilient. It comfortably outlived many of its technically superior contemporaries – games were still being made in the early nineties, well into the 16-bit era, and of course nostalgia prevails to this day. A fitting tenure and legacy for the console that, however rough around the edges, surely started it all. Pretty fun to model, too. 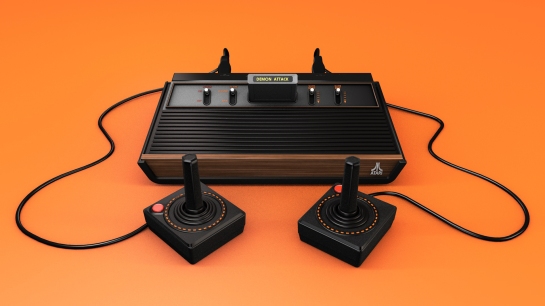 Fancy a game? Here’s some footage of E.T. for you. You’re welcome.